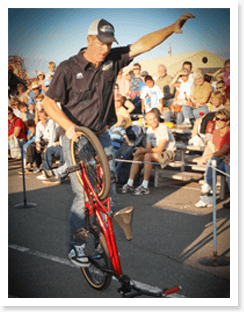 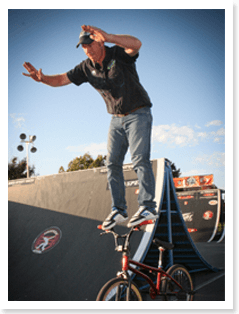 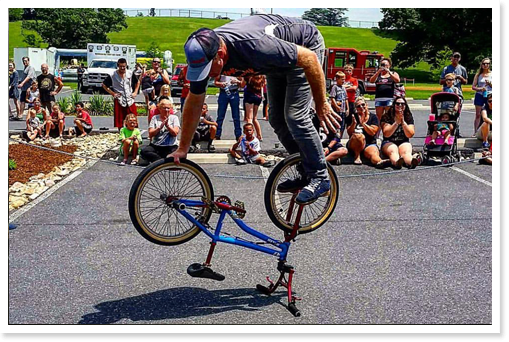 King BMX Stunt Shows is a full service BMX entertainment company. Its founder, Keith King, has been involved with BMX freestyle since 1985. Even before the start of his freestyle career, Keith was intrigued by bike stunts from the moment he received his Evel Knievel bike for Christmas in 1976.

Once what was only a dream became a reality as Keith made his mark as a professional flatlander, competing in both the 1997 and 1998 X Games. What sets Keith and the King BMX Stunt Show apart from other stunt shows is that to this day he still rides competitively in his own shows, as well as being an outspoken advocate for the sport.

King BMX Stunt Shows is one of the top stunt shows in the nation. Clients range from the NBA, WNBA, NFL, NASCAR, IRL, and state fairs to small town festivals, colleges and high schools as well as shopping malls, churches and company events.

With its close proximity to Greenville, NC (home to many of today’s top professional BMX athletes) King BMX Stunt Shows is able to showcase some of the top ramp riders in BMX. The show also provides flatland riders as well as inline skaters and skateboarders. Another unique aspect of this show is that it can feature the only scooter and rollerskater working in BMX stunt shows today.

King BMX offers standard and one-of-a-kind ramps making them one of the most sought-after shows in the world.

Multiple vehicles with multiple set-ups allows King BMX to handle several events on any given day around the country.

Double-Spread Feater in the
May 2012 Issue of BMXPLUS! Magazine

Quite possibly the fastest ramp on the planet, KING BMX’s NASCAR ramp is a hit at major sporting events.

"I have been quite impressed by Keith’s ability to deliver a highly entertaining show filled with impeccable skills and great imagination" - Jay Howard, JHE Production Group

"Working with the team was an absolute pleasure! From taking the time to do an advance site visit to ensure success, to their punctuality and professionalism through the course of the shows, the team did a fantastic job" - Leigh Herring, Richmond Int’l Raceway

"The group was easy to work with and made suggestions that helped with the show schedule. They were very professional with thir performance and extremely accomodating with the crowd after each show" - Joe Goeforth, Cleveland County Fair

"The team really got the attention of the crowd, often rendering them awestruck while they watched all the stunts" - Patrick Kelly, Univ. of Maryland

"We estimate that over 5000 people came to the event. Our mall traffic was up over 40% from the previousl Saturday and an average of 68% over the four Saturdays before that" - Amy Brown, Robinson Mall, PA